And he was promoting the notion that they would obtain
the "blessings of democracy" only under Muslim rule. 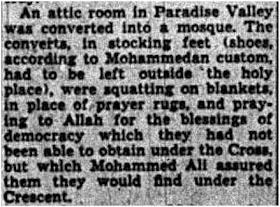 This find raises a host of questions.

Did Ali influence the MSTA leader James Lomax/Muhammad Ezaldeen, who in 1929 broke with Drew Ali, and, after aligning with a local Turkish group, move with his family to Turkey and later Egypt to start a Muslim colony?

Did Ali influence the African American Muslims who verifiably moved to Egypt in 1930?

Did Ali influence the founders of the Nation of Islam?

These questions, along with several other previously little-known details concerning early African American Muslim organizations, will be discussed in my forthcoming "A History of Conversion to Islam in the United States Volume 2: The African American Islamic Renaissance".