New Paper: Notes on the MSTA Schisms in Detroit and Pittsburgh, 1928-29

I wrote this paper back in February for the ALI'S MEN-sponsored East Coast Moorish Men’s Brotherhood Summit that was held in March. As the title indicates, I examine known documents concerning the schisms that took place in the Detroit and Pittsburgh MSTA temples in 1928-29. I chose these two temples because they are particularly important for the history of Islam in America.

*click to enlarge* This is a photo from the MSTA convention in 1928, and in this front row of people are MSTA leaders from that time. Noble Drew Ali is standing and wearing a white turban and robe. Lomax/Ezaldeen is the man standing to the right of Drew Ali and Crumby Bey is one of these men--perhaps the man seated to the immediate left of Drew Ali. [UPDATED 9/22/14 based on info from anonymous commenter. I had originally based my description off of an old newspaper article that listed these men's names in the photo caption but was vague about who was who.]

The schism in Detroit was directed by the temple's first leader, James Lomax, who formed what may have been called the "Mohammedan Church Temple." Noble Drew Ali reportedly personally came to Detroit to remove Lomax from his position and accused him of grafting funds from the temple, though at his trial a month later, Lomax was found innocent of the charge. The schism, though, still resulted in violence, including a shootout with police, six months before Ira Johnson's in Chicago.

Ultimately, the Detroit temple schism had major implications for the future of Islam in America. Fearing for his life, Lomax fled from Detroit and ended up in, first, Turkey, where he struggled to start a colony for African American Muslims, and then Egypt where he was trained by an important emerging Sunni organization. Now going as Muhammad Ezaldeen, he returned to the U.S. in late 1936 and became, with Sheik Daoud Faisal, one of the leading African-American Sunni leaders in the 1930s to 1950s, organizing and uniting Muslims all along the East Coast (from New York to Florida) and as far west as Detroit. His group, the AAUAA, which still exists today, even developed connections to Malcolm X.

The 1929 schism also resulted in Detroit's MSTA community falling into great disunity, which allowed for a Wallace Fard to bring many former MSTA members together in 1930 with a new, but similar teaching--the doctrines of the Nation of Islam. 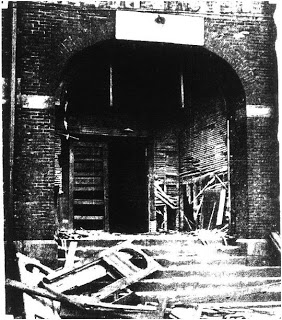 Photo of Pittsburgh MSTA temple after bombing in November 1929

The Pittsburgh temple's schism may be no less important in terms of its impact on Islam in America. The schism ultimately led to Walter Smith Bey, who most likely was a leader in the temple, leaving the MSTA and joining Qadiani Ahmadiyya Islam under Muhammad Yusuf Khan and Sufi Bengalee. Khan made Smith Bey--now known as Nasir Ahmad--the first African-American Ahmadi sheik in the Ohio River Valley region. Khan and Ahmad, who retained as followers several former MSTA members, led the impressive spread of Ahmadi Islam in the region (and out to Philadelphia) in the early 1930s. In the mid-1930s, when the black Ahmadi community began rejecting Qadiani leadership in favor of Lahori and Sunni teachers, it became the core base of African-American "Sunnis" in the U.S. When Lomax returned to the U.S., he connected with Ahmad (who was one of the first members of the AAUAA) and used the Ohio-Pennsylvania Sunnis as his base community for spreading Sunni Islam to other parts of the country.

You can download this paper at my Academia.edu website: http://www.academia.edu/3672537/Notes_on_the_MSTA_Schisms_in_Detroit_and_Pittsburgh_1928-29
Posted by Patrick D. Bowen at 8:27 AM

Patrick D. Bowen
Patrick D. Bowen is a Religious Studies scholar who specializes in religious conversion and the history of non-mainline religions in the West. Most of his recent work examines conversion to Islam in the U.S., which is the topic of his 3-volume series, "A History of Conversion to Islam in the United States". Patrick studied Religious Studies at the University of Colorado (B.A. 2003), at the University of Denver (M.A. 2009), and in the University of Denver-Iliff School of Theology Joint Program (Ph.D. 2013), where he specialized in Islam and Theory of Religion. He can be reached at pbowen303@gmail.com. For a complete list of his publications and a copy of his C.V., see his profile at https://independent.academia.edu/PatrickDBowen